Completely Blown Away By The SF Olympians Auditions

There's a reason that Stuart Bousel is known as a power-house in indy theatre here in the Bay Area. He does big things very well. We had over 100 actors audition between Sunday and Monday! Over 100! And I can still function as a human being. For those of you have have audited auditions before, you know how amazing that is. Typically auditions are endless, boring, uncomfortable, and if the actors are working from your play, you usually hate that play for at least a month after. Stuart has all the writers send in 30 - 1.5 minute monologues from movies, tv, books, anything really that was not written by the writers themselves. The actors prepare one of these monologues that they are handed randomly upon arrival, and after performing in front of the mob, the mob (writers and directors) get to make adjustments. For example, my director Claire Rice would often ask to hear one line from the monologue as a football coach or a peppy cheerleader. We fit in as many adjustments as possible in 15 minutes, and then we're on to the next group. On Sunday we were there for 7 hours, last night 2.5. Best auditions ever. I was tempted to jump up and throw my hat in the ring as an actor, and then I realized how insane that was seeing as I am busy all the time.

Once auditions wrapped up, we scoured over head shots, checking conflicts of the actors we wanted, and then sent in our wish lists to Stuart. I was so happy to send in 3 or 4 solid choices for each of my roles. I was really overwhelmed by the talent. Under The Gods’ Golden Cleats needs SIX men for the reading, I was scared. But today I'm feeling great. SO! Stay tuned to hear my cast, hopefully I'll know it within a week! And once Stuart makes it facebook-official I will yell it out for all the Internet to hear.

Also, RSVP for the reading on November 9th! You can't get tickets in advance, but this way you'll get reminders on facebook. Do that here: https://www.facebook.com/events/166435956886604/

It's going to be an excellent night of theater, and I'm pretty sure we'll pack the house. RSVP, AND show up early. Remember, it's cash only!

And if you want more info about the festival, check out the SF Olympians’ website: http://www.sfolympians.com/ 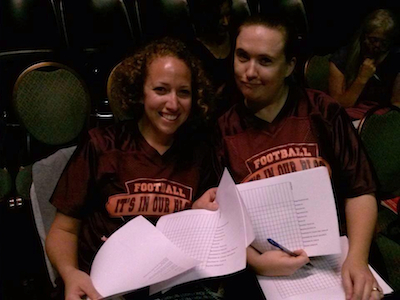 Here I am, with my director (Claire Rice) wearing our Achilles jerseys and showing off our spread sheets. Photo taken by Charles Lewis III.