Announcing (in)divisible This June With Plan-B! 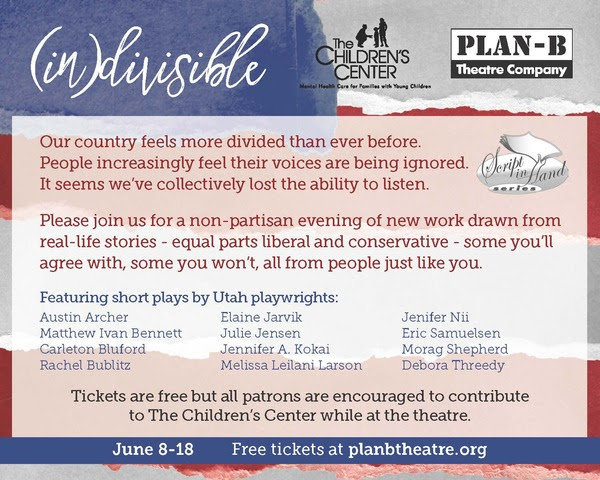 Salt Lake theater company Plan-B, whose mission it is to produce only local Utah playwrights, is producing a script-in-hand series featuring short plays responding to the response of the election. Without and politicians named, the hope is to create a space where people that disagree can talk and actually listen to the other side. I was honored to be asked to write, and have been working furiously on my two short pieces, Red and Blue. Each playwright had to write from both a liberal and conservative perspective.

The show will run June 8-18, 2017, Thursday and Friday nights at 8pm, Saturday at 4pm and 8pm, and Sunday at 2pm. You can reserve your free ticket here, donations will be requested at all of the performances, and the money raised will be donated to The Children's Center.

ALSO, between now and the end of March Plan-B is accepting donations for Love Utah Give Utah. They have a generous matching donor, so all the money you send their way will double instantly, like magic! If you're in a position to help, they're hoping to convince 500 people to send $10 their way, and if you can't help financially, sharing their champaign helps too! All the help helps, and anything you can do is great.

Hope to see you at (in)divisible in June!