Recommendations and a Fantastic Review for RIPPED 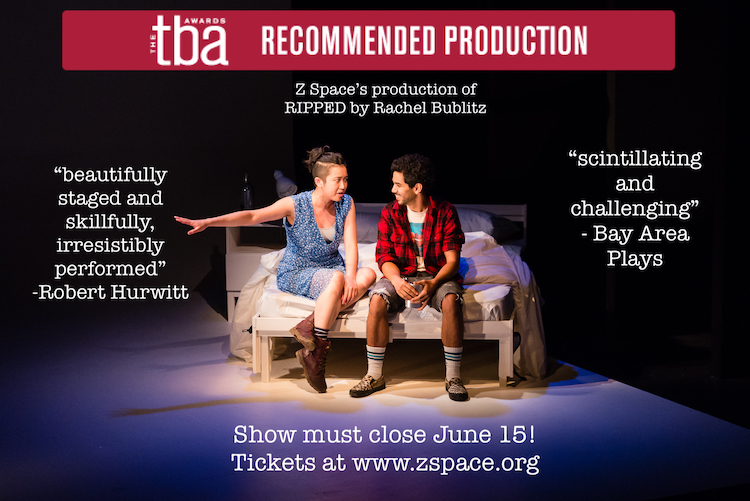 WE ONLY HAVE TWO PERFORMANCES LEFT! Tonight and tomorrow at 8pm and then the world premiere of RIPPED at Z Space closes! Now is the time to put all of your life on hold while you figure out how to make it to one or the other. Art is at stake!

"The power of the Z Space world premiere production of “Ripped,” written with piercing detail by Rachel Bublitz and directed with razor sharp focus by Lisa Steindler is that the play takes black and white concepts and loads them with nuance. The belief of one thing is challenged immediately by a character’s action, and by the end of the plays 80 harrowing minutes, it’s extremely challenging to firm up any consistent opinion at all.”

Read the entire review right here! You can also check out an interview David and I had about the show for Bay Area Plays here.

And that's not all!!! We are now an official Theatre Bay Area recommended production!

And and and, if that wasn't enough, former SF Chronicle critic Robert Hurwitt had this to say about RIPPED:

"A beautifully staged and skillfully, irresistibly performed three-person dramatic exploration by Rachel Bublitz of the complex ambiguities and politics of sex on college campuses today. A brilliant performance by Krystle Piamonte anchors a memorable world premiere.”

(You can also click through to YouTbue and catch the video here, in case of website weirdness….)

FINALLY….. Time to buy your tickets. Let's give this knock out production and fabulous team sold out houses for their final TWO performances. So buy your tickets, tell your friends, family, co-workers, and strangers on the street: www.zspace.org/rippedshow