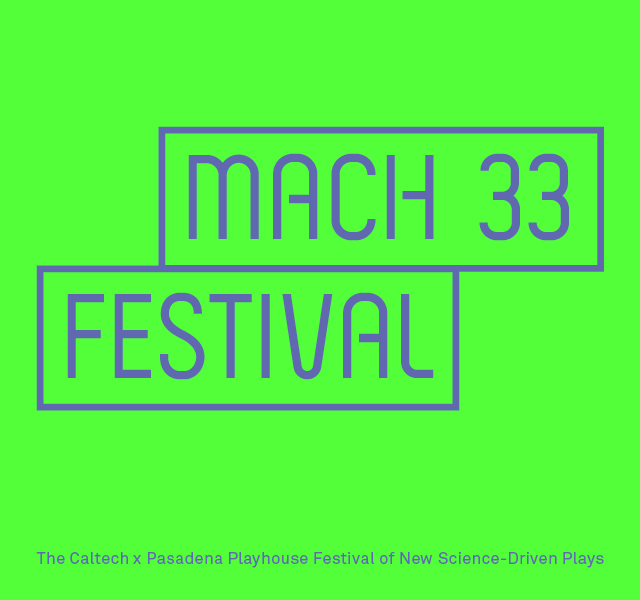 The date for the reading of BURST in Cal Tech and Pasadena Playhouse's MACH 33; a festival of science driven plays, has been announced! Mark your calendars, your agendas, your planners, because the evening of April 3rd you are now officially booked up.

BURST will have a staged reading Friday, April 3rd at 7:30pm at the Pasadena Playhouse. Read more about BURST (which, by the way, might be about to blow up out the box (pun intended)):

"Sarah Boyd is an extraordinary human being. Not only did she build her company from scratch using nothing but willpower and fortitude, she also sits on the precipice of truly saving this planet. Because on top of being one of the fastest growing tech companies in history, Tactix, with Sarah at its helm, will usher this planet into the post-plastic era. A time where we need not worry or fret over the great destruction being done to our world from this non-biodegradable foe. With her eyes steady on her next round of funding, Sarah must persevere through a late night interview with a particularly tough reporter, a lawsuit aimed at a person from her past, and the waffling of her CTO. It's a heavy load, and Sarah knows that she is the only one great enough to bear it.”

BURST will join two other plays for a weekend packed with science and theater. I CANNOT wait!

"Molly Royce has one goal in life: honor her father who recently died of Huntington’s disease by carrying on his pioneering work and keeping her promise not to be tested for the genetic disease. Shayna Williams has trained all of her life to become a professional violinist, but a neurological disease threatens her dreams. As Shayna reluctantly agrees to participate in Molly’s research, their unlikely friendship is put to the test when Molly is confronted with the ultimate decision: keep her promise to her father or risk passing on the disease that killed him.”

THE SUNRISE FROM THE MOON by Hannah Manikowski

"The year is 2096, and Annaliese Gardner, a refugee from the defunct Lunar Colony Montgomery, is returned to Earth and housed in the Georgia Aquarium's jellyfish room. Mina Espinoza, a researcher from NASA, is assigned to Annie's case. If she can extract from Annaliese what caused Montgomery's failure and simultaneously mold her into something resembling a typical American citizen, she is confident she'll win over the public opinion and reinstate NASA's prestige. But the intentionally difficult, pointedly bizarre, and deeply traumatized Annaliese is wary.”

More info coming soon as I get a cast and a director, possibly even a shiny poster for promotion! For now plan on hanging with me on my birthday weekend, getting your theater on in sunny Southern California.